Group Process isn’t easier – but it is faster and better. And can be cheaper. 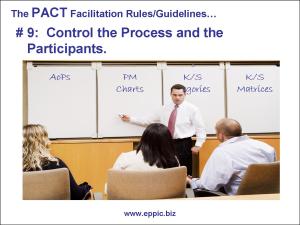 I call these “The 12 Rules and Guidelines of Proactive/Confrontational Facilitation for the PACT Processes for T&D.”

They are:1. Go Slow to Go Fast. 2. Be Declarative. 3. Write Stuff and Post It. 4. Be Redundant by Design. 5. Use the Four Key Communications Behavior Types. 6. Review and Preview. 7. Write It Down and Then Discuss It. 8. Use Humor. 9. Control the Process and the Participants. 10. Be Legible on the Flip Chart. 11. Beware of Group-Think. 12. Assign Parking Lot Valets.

The 9th of these is covered in more detail in the following text.

Read these. Use these. Reflect on these. Balance these.

9. Control the Process and the Participants
The facilitator can never let one individual, or a small group within the larger group, dominate the meeting. That would certainly be a disservice to everyone else involved. 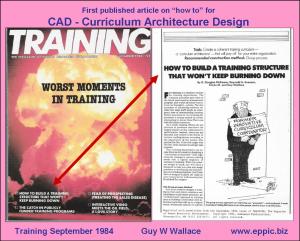 The best thing to do if this begins to happen to you is to thank the person for their input and then ask someone else for theirs.

Then shift your style to aim specific questions at specific individuals. “Bob, what do you think the next set of tasks are for this output?”

If that doesn’t work – call for a break – and take the offenders aside and explain that you need a balance of inputs to ensure a consensus is forming. While you appreciate their contributions, you hope they understand what you’re doing.

Usually they get the message and back off. Maybe they’ll need another reminder or two.

Sometimes none of these tactics work.

It is rare, but I have had to “disinvite” participants from my meetings. I think it has happened twice. A long time ago.

I now see the warning signals much earlier and can “head it off at the pass” quicker now-a-days.

That means I’ve been at the point – in the past – where someone’s participation was so dysfunctional – that I asked them to leave.

I had to. They were disrupting the Process by inhibiting/intimidating the other Participants. The prior conversations/warning-shots-across-their-bows were ignored – or the behavior got worse instead of better.

If/when they resisted my de-invitation, I suggested that I would call their boss to insist to that person that they be requested to return to the office. That’s when they either drastically changed their behavior, or they left. I had no choice. They were so disruptive that they were wasting the time and productivity of everyone else. 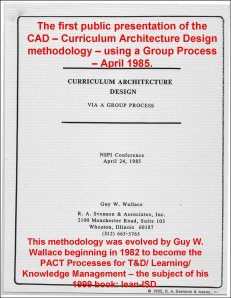 Of course, I’d given the disruptive participants plenty of warning.

Prior Steps
Prior to dismissing them, I had taken them aside during a specially called break and warned them of my next move (which would be insisting that they depart the process).

Prior to that I had taken them aside during a regular break to discuss their participation style and the effect on the group and our progress.

Prior to that I had tried to manage their behavior during the meeting by asking out loud that they let others participate more.

Prior to that I had tried to get the group to help me self-manage the problem participant by asking for their opinions in response to the one individual’s points.

“When you can’t stands no more”
To borrow a phrase from Popeye.

I had exhausted all possibilities. I had tried, I was done, and so were they.

When push comes to shove, I have to shove back.

I am the person that the group looks to to control the process and continue our progress. It’s my job.

I can’t blame “their” hesitancy to act. It’s not their job. I must act.

Otherwise, I am allowing someone (or more than one person) to waste all of our collective time and energies. 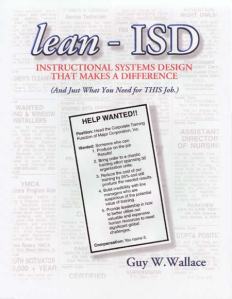 Don’t let this happen to you. Take charge, take action. It isn’t pleasant, but it is the job of the facilitator―at least in my view of the role of the proactive facilitator.

And it may on rare occasion be necessary for you to act. Hopefully never.

Pray for the best. Plan for the worst.

In the future we’ll cover the remaining 3 rules/guidelines one-by-one!

– Sourced and edited/embellished from Appendices C of: “lean-ISD” – a book by Guy W. Wallace – available as a free 404 page PDF at http://www.eppic.biz/