This post is about the back story for the article that I wrote and published back in 1991 on “Costing Out a Training Project” that was titled by me as “Cost Of Nonconformance And ROI For Training Projects” when I submitted this to the editors at ASTD’s Technical & Skills Training journal in late 1990 or early 1991.

The back story is about the inspiration for that 1991 story – that published article, the original by me which is now available:

Cost of Nonconformance and ROI for Training Projects _ASTD – 1991 – 9 page PDF of the original article submitted and published in ASTD’s Technical & Skills Journal in their May-June 1991 issue under the title: Costing Out a Training Project – 1991 – Wallace (which it did not address). This presents an alternative approach for determining ROI that was unique to one of my client’s situations, and a proxy for ROI: RONA – using the quality concepts of Cost of Non-Conformance and the Costs of Conformance in place of Returns and Investments respectively.

The other influences of mine in the back-story, besides Gilbert, was what I learned from working in projects with Geary Rummler in 1981 and 1982 at Motorola’s Training & Education Center, and from the quality movement’s Juran and Deming in particular, and lastly lessons from efforts that we were embracing and supporting a culture change effort – at Participatory Management.

So in some gig with a Defense Contractor in the late 1980s and early 1990s I was asked to participate in a CAD effort – a Curriculum Design effort. For an audience of CAD-CAM operators.

We did the 4 Phase CAD project quickly and at the last Project Steering Team meeting – a gate review meeting – we were in a position to present the costs for going forward on the priority gaps – after they had approved the architectural designs – the T&D Path – in Phase 3 for the learner population. All based on the analysis efforts and production of both performance models and knowledge/skill matrices in Phase 2. In Phase 1 we had earlier collaboratively planned and resourced the effort once it had made business sense to the steering team.

But before I told them the costs for going down the list of priorities – and they would see the grand total if you did everything was $2 million – I was going to walk them through a little ROI exercise using the concepts of CoNC and CoC – which I knew that they would know to mean the Costs of Non-Conformance and the Costs of Conformance.

The CoC is the I from ROI and the CONC is the R. The difference Gilbert might have called the PIP – the Potential for Improving Performance.

When I had tested this out the week earlier with my close immediate client group (before I sprang the grand total on them) I walked them through the same Socratic ROI Calculating game. Humor me I asked the PST. They liked me enough by them that they would indulge me a few minutes – but I had to prove quickly that this was going someplace they could understand and not some prim-rose path to the illogical. Not with this group of engineering and manufacturing managers and master performers we had assembled.

And they knew that the R in the ROI would be huge! They had been complaining about the lack of evident skills in the former draftsmen who used to work on paper on drafting boards who were know expected to use this new CAD-CAM tool, for Computer Aided Design and Computer Aided Manufacturing. To reduce defects in design and save a bunch in manufacturing scrap and retooling cots, and on and on. It was a Big Deal to address. It was a Critical Business Issue.

The tool was just not intuitive, although very powerful. The vendor trained a few dozen and then left. What they had taught was deemed inadequate and too general for going forward with a fix.
So I, like a good lawyer, start asking questions, Socratically, that I already know the answers to. And using the best of my public active listening skills I wrote down their answers for all to see and for me to confirm first with whomever volunteered the data point, and then confirm with the entire room.

How many in the total target audience for any new training? I wrote the answer on the white board in the conference room where we were assembled.

How much is their average totally loaded salary? I wrote that down next.

What percentage of the job involves this CAD=-CAM tool?

What is the average Proficiency level on a zero to 100 scale.

When enough steam had been let off they were ready to plug in some numbers – especially after I loudly suggested that we do several scenarios. And I built a table such as the one in the graphic below.

And we played with the numbers. I picked out someone in the room and asked the group to honor this person and let them help us place a stake in the ground. I knew this person a little and thought that they would be OK with me picking them out. They were genuinely surprised that I called on them. And it showed. It was a good guess on my part too, but this was our 4th meeting together. So the double edged sword I was playing with was cutting just the way I wanted it too.

But I knew this was tricky.

That man gave the room of 20 his personal view for the levels of proficiency that the staff was probably at. He started with the grand average of 40% They were all at 40%, at best. And the number could be worse. It could be 25%.

Debate began again. And when I say debate I really mean debates. Maybe 4 or 5 going on simultaneously. Which any facilitator knows is good to a point. Then it’s time to pull them back.
So now the question became more about asset utilization. That they could all understand. 4 levels of evaluation for instruction? Please.

They didn’t do more than one scenario. They simply reworked the first one a few times.

So the number s looked like this for the Cost of Non-Conformance using annual salary dollars as a proxy for the value of that human asset. 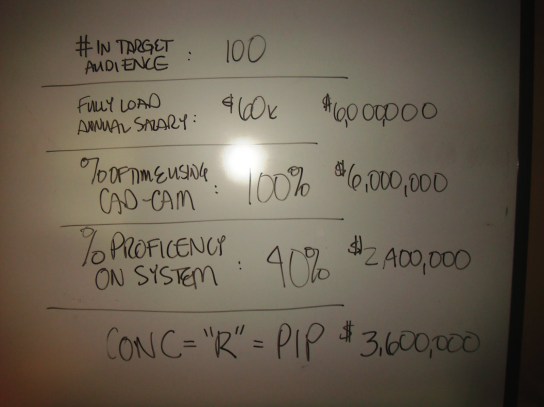 So I summarized for us all, “the cost of doing nothing at all seems to be more or less $ per year.”
The room went quiet. They knew this was my trap. But these are rational thinkers and they sat there thinking about this. Yes, that was true. If we did nothing, this is the price tag for letting this issue go and doing nothing at all about it except live with it.

That was obviously not acceptable. The numbers for the leverage potential of the human asset was enough to sell this all by itself, and everyone knew that there were many other complicated costs to be saved such as the rework of the draftsmen plus those significant costs for retooling and scrap. You know, we don’t even want to calculate that. Thank goodness we didn’t!

And so when I said that the top-end total cost for addressing the gaps, building out the content needed, was $2 million, and added that this did not include any deployment costs – they were way past me. No one was focused at all on the $2 million.

Except for the financial rep from the T&D organization. They knew that they would have to squeeze the balloon to find this in the budget someplace. But it was early in the fiscal year, so that would be easier. And he too was pretty darn convinced that this was exactly what needed to be done.

That’s how I knew it was time to move on. The questions were about going forward, not where we were currently at. That was my clue and cue.