Sharing a few memories of one of my key – if not key – professional mentors: the late Geary A. Rummler, PhD, CPT. I talked with his son, Rick Rummler, at the ISPI Conference last week. Rick was there for the inaugural awarding of The Geary Rummler Award for the Advancement of Performance Improvement – received by Klaus Wittkuhn – see more about that here.

Geary was a Brooklyn Dodgers fan. That’s what that “B” is for in the photo above.

The ISPI Conference is almost always very close to his birthday – and that meant I had just gotten another booster shot – until the 2009 Conference – as he had passed away on October 29, 2008.

I was damn lucky – to have been able to work with him (and Carol Panza) for the 18 months I spent at Motorola – 1981 – 1982. And that we remained fairly close over the years after that. Closer at times – often working together on something related to ISPI.

Here he and I are in my boss’ office in the Phoenix area in 1982 – working on a project for MTEC – Motorola’s Training & Education Center. 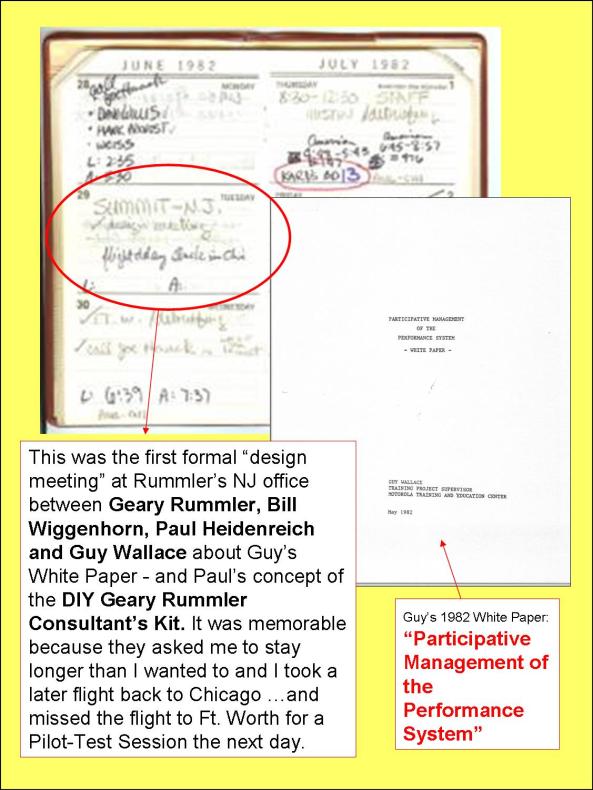 The DIY-Geary-Rummler Consulting Kit – was a derivative of my White Paper Proposal – here – that later morphed into Six Sigma – here fellow MTEC-er Alan Ramias writes years later about the Rummler involvement in what became Six Sigma.

Geary was a reader – and he shared books – generously. This is the envelope he used to send me and my wife (at the time) a Robert B. Parker book at Christmas/New Years time in 1983 (after I had already left Motorola) – and he had also turned me on to “The Right Stuff” by Tom Wolfe a year earlier by buying a copy for me while we were at an airport together – and then he did the same thing with a book by author Tony Hillerman many years later. 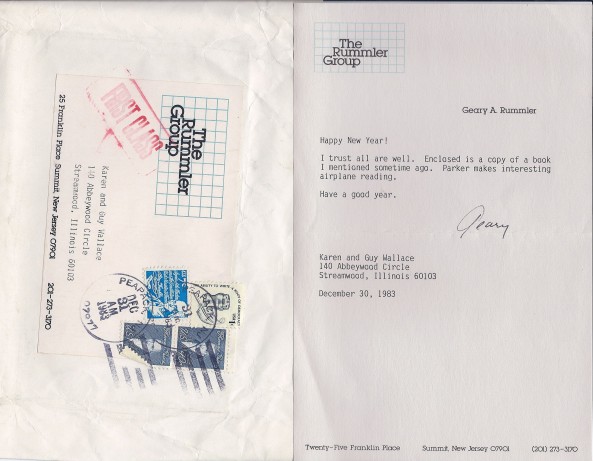 Tom Wolfe’s 1979 book The Right Stuff about the test pilots who were involved in the run up to the USA’s space program. Geary often talked about “the right stuff” and quoted from this book. He also quoted Popeye as well; my favorite: “that’s all I can stands ’cause I can’t stands no more” – often when experiencing a situation where there wasn’t the right stuff – but other kinds of stuff – barrier stuff – in the way of performance.

He contributed several articles to my firm’s newsletters over the years. The article below can be seen here. There are others – you can search for them on my site.

He gave basically the same presentation about “Performance” for the 30 years that I knew him. But I learned something new from him every time I heard him.

Here is a video of him (46 minutes) from 1981 at MTEC – and it is as good today as back then – talking about Performance-based Training.

I asked him to sign his book for me back in 2004 at an ISPI Conference after I picked it up in the bookstore in front of him as he and I wandered the isles together. He took the book to his room that night – saying he wanted to think about it before signing it.

One of my most prized professional possessions…

I hope all fans of Geary’s can take a moment today to reflect on all he did for them, and for our profession. I know I will.

2 comments on “Celebrating the Life of Dr. Geary A. Rummler – on His Birthday – April 16th”