Richard Clark is Professor Emeritus of Educational Psychology and Technology, Clinical Professor of Surgery and has served as Co-Director of the Center for Cognitive Technology at the University of Southern California.

Before coming to USC he was a faculty member in Psychology and Education at Stanford and Syracuse Universities. He is also CEO of Atlantic Training Inc.

This is Dick keynoting at ISPI’s 50th Anniversary Conference held in Toronto in April 2012.

Dick is the author of over 300 published articles and book chapters as well as three recent books – Learning from Media: Arguments, analysis and evidence, Second Edition (2012, Information Age Publishers); Handling Complexity in Learning Environments: Research and Theory (2006, Elsevier) and Turning Research into Results: A guide to selecting the right performance solutions (2008, Information Age Publishers) which received the International Society for Performance Improvement (ISPI) Award of Excellence.

In recent years he has received the 2013 USC Faculty Lifetime Achievement Award, the Thomas F. Gilbert distinguished professional achievement award, the 2010 Thalheimer Neon Elephant Award for bridging the gap between science and practice, the Socrates award for excellence in teaching from the graduate students at USC and the Outstanding Civilian Service Award from the U. S. Army for his work in distance learning.

The 2010 Neon Elephant Award was awarded to Richard E. Clark. for his many years in leading the workplace learning-and-performance field by bridging the gap between academic research and practical application.

His current research interests include the design and evaluation of online and blended instruction for adults on highly complex tasks, cognitive load theory for multimedia and simulation training, the development of the Guided Experiential Learning design systems for pedagogical applications and the use of Cognitive Task Analysis to capture and teach the complex knowledge used by advanced experts in all fields.

Clark’s interest is in the design and application of research on complex learning, performance motivation and the use of technology in instruction. His most recent books include: Handling Complexity in Learning Environments: Theory and Research (2006, Elsevier, with Jan Elen; Turning Research Into Results: A Guide to Selecting the Right Performance Solutions (2002, CEP Press, with Fred Estes) which received the 2003 International Society for Performance Improvement Award of Excellence andLearning from Media: Arguments, Analysis and Evidence (2001, Information Age Publishers).

In 2002, he won the Thomas F. Gilbert distinguished professional achievement award from ISPI and in 2003 he received the Socrates award for excellence in teaching in the Rossier School of Education.

I’ve known of Dick since the late 1990s from all of my involvement and being on the Board at ISPI – the International Society for Performance Improvement – and got a chance to work directly with him in 2003 when I became the president of ISPI and I asked him to conduct a strategic planning exercise with my new, incoming board.

And then we worked together again in 2003 on my presidential initiative to Define HPT.

One Many Things I Learned From Dr. Clark

… was to always look beneath all claims for programs or approaches for performance improvement for the evidence, for the science behind those claims.

The  more I then looked, and did a little homework beyond repeating the claims I read and heard made in various publications and conferences and professional group meetings, you know, back in the day,  I had to start to really question them. For they lacked what Dick taught me to look for – look for the evidence. Many intuitive things are just wrong.

Also: Look at how any evidence presented as such, was gathered.

And: Who gathered it. How independant were they, are they?

What I Also Learned From Dick Clark

From his ISPI Performance Journal article with Jeanne Farrington, EdD, in 2000- Snake oil, science, and performance products – I learned of the evidence regarding MBTI as but one example of snake oil…
http://onlinelibrary.wiley.com/doi/10.1002/pfi.4140391006/abstract

If nothing else, for there are additional videos that follow, watch this 7 minute video…

I’ve had the pleasure to chat with Dick at conferences, on the phone, and via some email exchanges. He has been very generous with his time – at least he has been – and more recently was again with me. But that true of many of the long time members of NSPI/ISPI. Sharing. It’s the tradition.

Dick wrote a wonderful forward to my 2011 book: The Fifth Management Foci. 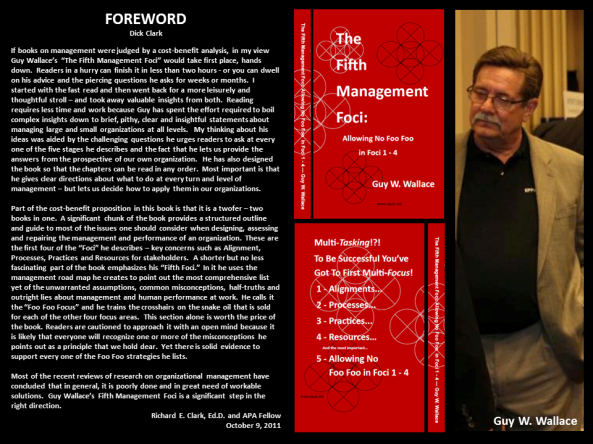 Some Great Resources From Dick For You

Articles – Many articles may be downloaded from this page at USC’s CCT – University of Southern California’s Center for Cognitive Technologies web site:

Our friend, Jeanne Farrington, reviewed this video in her Blog Post – here.

Guy Wallace, one of my ISPI friends, has been interviewing some of our leaders in human performance technology (HPT). Last year, he sat down withDick Clark, who is an outstanding researcher in our field. They talked about HPT, cognitive task analysis, constructivism, instructional games, simulations, and ways to view evidence.

I’m sharing my fairly rough notes, with approximate time stamps. These notes should make it easy to see what topics are on the video and where to find them. Thanks to Dick for reading these notes ahead of time and adding some additional thoughts.

The term itself—Dick is fine with it. Acknowledges that some don’t like the term “technology,” because they think of it as having to do with machines. But “technology” is really about the application of science and experience to solving problems.

Here we are/here’s where we want to be/here’s the gap.

What’s the cause of the gap?

How do we close it?

We should emphasize gap analysis more and continue to develop our approaches to it over time.

Please check out Jeanne’s full post here – and all her other Blog Posts! Here.

For a former Blog Post of mine with a video of Dick discussing: Gap Analysis – please go here.

My Favorite Memories of Dick

I recall him asking me in 2002 if I was willing to see the field of HPT shrink or expand. We were on a Task Force in 2003 looking to update the definition of HPT – Human Performance Technology – an initiative begun when I ran for President of ISPI wanting to address a 1983 article by Geary A. Rummler about “Defining HPT” not with a paragraph or two, but by defining the technology domains of HPT. That made sense almost 20 years later, and he agreed to support this effort.

I said to Dick once this thing got kicked off at the ISPI Conference in 2002 that I would hope that the picture in everyone’s heads about HPT would become more uniform, expansive, much more than just performance-based ISD. Dick made very strong contributions in our first 3 day meeting, facilitated by my former business partner, Ray Svenson. He and Jeanne Farrington’s model for defining what is and is not HPT – Human Performance Technology.

I’ve written about that initiative in this Blog before. And – here – is the report from that effort at this web site – here – intended to keep that work accessible. Back to Richard E. Clark.

Dick is not afraid to challenge other thought leaders. His passion for EBP – Evidence Based Practice – is evident in his presentations. He encourages me to also make challenges to some of the prevailing nonsense in my professional space. I hope he encourages you in that manner as well. 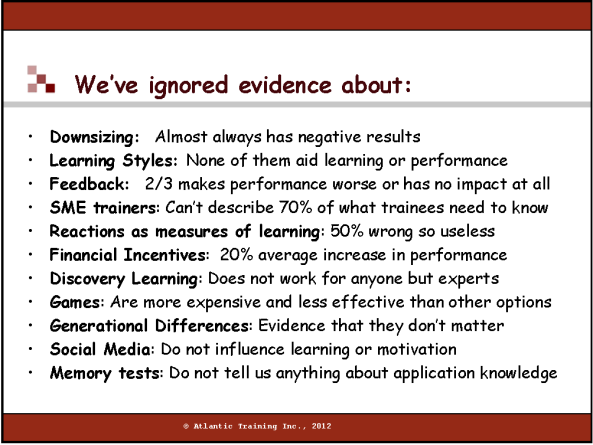 Dick lives in California with his wife Mary Ann. From his facebook page I can see that they have some young grandchildren, something we also share. He continues his consulting efforts.

If Dick Clark has been a valuable influence and/or resource for you – please share your stories about that in the comments section below.

We each have many influencers, mentors both active and passive, knowingly and unknowingly. This series is my attempt to acknowledge all of them as I reflect on what I have learned about Performance Improvement.

Just please give me some time to get through them all. It’s a long list.

My Guru Series so far …