When I first came across the Learning Reference Model of 70-20-10, and it’s history, it occurred to me that it reflected the “As Is” state and not the “To Be” state – as the late Geary A. Rummler labeled the two back in the mid-1980s in his work, which led to Motorola’s creation of Six Sigma.

Specifically, Performance Support, a.k.a.: Guidance or Job Aids or Quick Reference Guides, appeared at some point in the 70, or as Ryan Tracey named it in his 3E framework, in the Experience segment.

Rummler and Gilbert called it Guidance – back in the day – way back in the 1960s and 1970s. The concept isn’t new. The mobile smartphone and wireless tablet everyone has is what’s new. They enable ubiquitous Guidance.

Which doesn’t feel Informal at all. Hmm.

That’s a shift in the model. But why, I wondered. 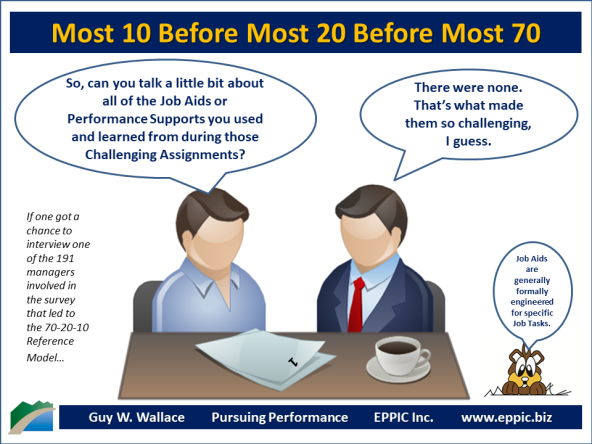 I’m not sure when and where this notion that people in L&D/T&D needed to be made aware that not everything under the sun needed Formal Instruction – or when some/many in the T&D/L&D community fell into that kind of thinking – but the Reference Model is made to address this false notion.

A bit of a straw man – perhaps. Perhaps not.

Perhaps the field has mostly gone out to left field. Too much development sans Analysis I’d bet. Too easy to create another eLearning module. One after another. Together they’d all be overlapped and gapped. Not good.

But why target someone else’s Current State – especially when that someone represents 191 managers?

Why think that these percentages add any value – as they are not good guidance as a benchmark or ideal? They’re just not. 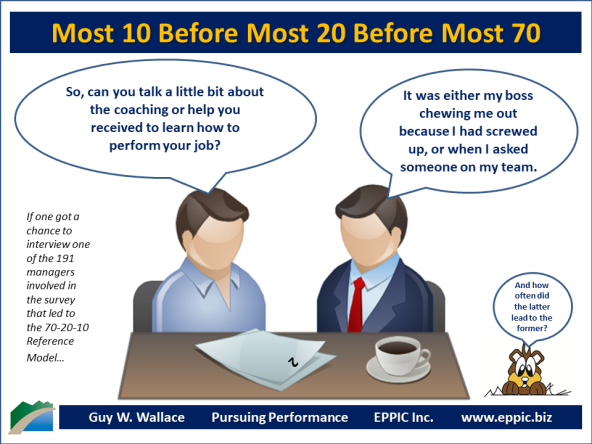 Back in 1982 when I left Motorola and joined a small consulting firm, I was formalizing the methods and tools and techniques for CAD – Curriculum Architecture Design – via a Facilitated Group Process. A process that I had been developing and using at MTEC – Motorola’s Training & Education Center for my corporate-wide clients in the manufacturing, materials and purchasing domains.

I was already being asked in late 1982 and early 1983 by some of our consulting clients – at AT&T and Dow Chemical specifically, and to teach their staff on how to conduct CAD efforts on their own- and I was also responsible for the training of our own growing staff of consultants at Ray Svenson’s consulting shop (later to become SWI – Svenson & Wallace Inc.). In mid 1983 we decided to have one of our less-busy-at-the-time new consultants write an article about these methods.

The 1984 Training Magazine article on this CAD via a Group Process is available here as a 5 page PDF. And here is the 30 page PDF of what was submitted to Training in the fall of 1983. Indulge yourself.

When some of the uncovered Job Tasks & Outputs – via the CAD Analysis efforts – were deemed not significant enough to include in the Architecture Design and then end up on anybody’s T&D Path in the Design efforts – they were classified as Un-Structured OJT.

They needed to be learned – and would be “by hook or by crook” – as we’d say back in the day. But it was to be left to what a couple of decades later would be more popularly known as Informal Learning.

Other than the more recent inclusion of Performance Support in the 70. Which makes it, the 70, a lot less Informal in my mind.

Leaving some Knowledge and Skills to chance is sometimes appropriate. Appropriate from a Shareholder’s perspective.

Just because an ISDer could identify a real Knowledge/Skill need – did not in and of itself warrant meeting that need.

That’s a Business Decision. Not an ISD Decision.

Sometimes there just isn’t enough R for the I, so to speak. Or enough Resources – people and money, etc. And it might be Overkill-in-the-Extreme to address it all.

My methods for CAD beginning in 1982, and later for my MCD methods (my version of ADDIE, formalized in 1990) was structured to separate the two types of decisions – and have Training folks make the ISD Decisions and have the client, in the form of a Project Steering Team, make the Business Decisions – at each of the 4 Gate Review Meetings at the conclusion of the 4 Phases of efforts. 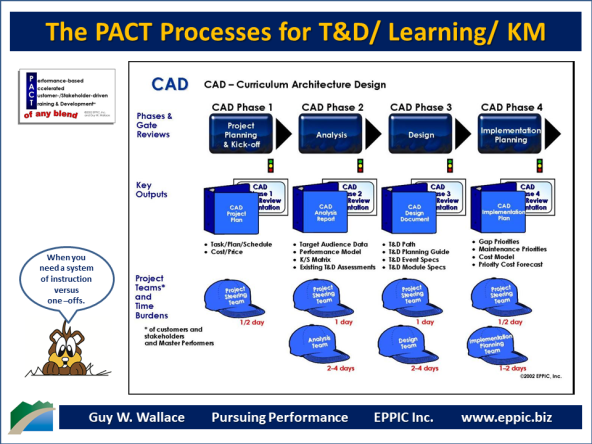 Joe Harless’ framing in the 1970s and 80s for Guidance was different: he called them Job Aids. 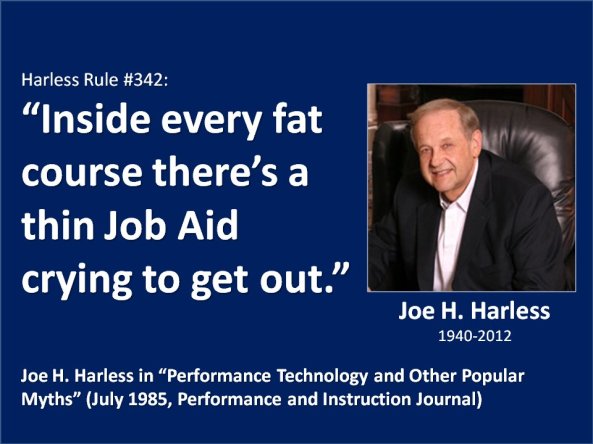 But if Performance Support was to now be included with all of the other routes to Informal Learning – in the 70 or Experience frames – then it would necessitate including mechanisms for the Business Decision Making process to Prioritize, and then Resource, the engineering of those Performance Support Resources.

I liked it better when the engineered Performance Support was in with the Education segment – as a standalone or as supported by Formal T&D. And the 70 – Informal Learning – via Challenging Assignments – was left as it originally was.

Now people in T&D/L&D feel a need to work in that segment as well. In all 3 segments.

In the Formal Education – or 10 segment. Which I agree with, providing first resources and then courses. I was taught that after, and well, during Analysis, one should first look to see what could be supported by standalone Job Aids; then what could be supported by Job Aids taught in training courses, and then what needed to be covered in training with lots of practice with feedback to ensure recall and skill would be available upon demand – when there’s no time for referencing a Job Aid. Or Guidance. Or Quick Reference Guide. Or Performance Support.

In the Exposure – or 20 segment. Which I agree with, providing Structured OJT when one didn’t want to rely on any coach providing their varied take on any Task & Output – and you needed some prompts to keep them on track. Some 20 should be engineered/Formal – and other, non-consequential Tasks & Outputs left to very Informal – which makes that 20 – more 70 – IMO. Pure 20 that’s Informal, is subject to whatever the source can readily recall – which is an issue as most everyone’s knowledge is non-Conscious – and the research shows that up to 70% of what a novice needs would be left out.

And in the Education – or 10 segment – Formal Training – leading to measurable learning – should be performance-based, and be about Tasks & Outputs and not just Topics.

I’d support it with just the first two check-boxes.

And I still don’t like the use of some “As Is State” numbers to promote that a blend of Formal to Informal – or not everything has to be covered in a classroom or an eLearning module. Si I prefer Ryan Tracey’s 3E model.

But if you must use numbers – I’d flip them to:

To help clarify up-front what the Job is and isn’t Task and Output-wise and how both are measured (formally and informally) – and to present who else might be involved in Task Performance –  to keep the learning of any Poor Practices in critical (High Stakes) Performance from occurring in the first place – and to point to Performance Support resources and how to locate them and how (for some of them) are to be used (unless it is just way too obvious).

My thoughts on the new, v2 of 70-20-10, where the 70 is not just Informal Learning from Challenging Assignments … where Resources (engineered or not) now makes that segment less Informal – are reflected in this graphic…

Some resources are for general tasks, like operating Word or PowerPoint – or fixing a leaky faucet. A Pilot’s Pre-Flight Checklist would be engineered for a specific situation (aircraft).

L&D or T&D must have felt a need to own it all – including Challenging Assignments – so they had to include something that they could do for that segment too IMO.

No wonder our clients and much of the field is confused.

The meaning of the 70 – once Informal Learning from Challenging Assignments – is now supported by engineered resources (PS, Job Aids, etc..) and other resources that just might happen to help, and also left to pure trial and error, from challenging or not, assignments. A Blend – from Informal to Formal. Just without Courses.

Note that in my flipped version of Most 10 Before Most 20 Before Most 70 – the 70 is pure Informal Learning without any engineered Performance Supports – Resources or Courses.

But I can be flexible. I just hate having to explain any and all of this to clients and prospects – beginning with the fact that the numbers shouldn’t be thought of as any guidance.