File Under: Eating Our Own Dog Food

In 1995 Email was pretty new and we wanted our staff at SWI – Svenson & Wallace Inc. to have performance competence on this new fangled thing. There was a Performance Test on its use – but no Formal Training – meaning it was un-Structured OJT – later known as Informal Learning or Social Learning that led to the Testing. And maybe that is now known as the 70 and the 20. Confusing – no/yes? A graphic from our 1995 newsletter… 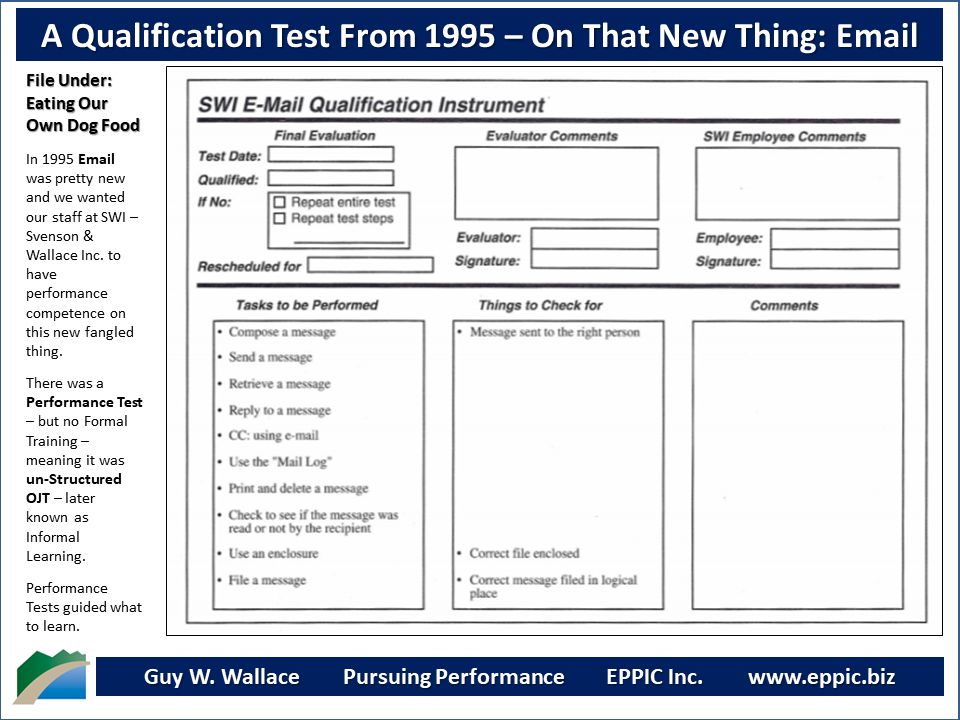 When I did Curriculum Architecture Design (CAD) projects we produced a performance-based T&D Path or T&D Blueprint or T&D Map – later known as a Learning Path, and now known as a Development Map or Learning Experience Journey, and in the future will be known as something else – again. That’s how that goes. Confusing – yes/no? A T&D Path identifies both what is available and was is partially available and what is not available – the last two being the gaps from “All the T&D that could be” – which of course is way different from “All the T&D that should be.” The difference between ISD Decision Making and Business Decision Making. Confusing? At SWI back in 1995 we had a Path of Performance Tests – not Training.

Performance Tests Guided What to Learn

This was covered in my former organization’s Spring 1995 SWI Newsletter – here. See the first of two articles on this beginning on page 10. Ray and I then 12 years later, in 2007, wrote this book based on the work we did at Prudhoe Bay: See more about this book – here.

And in 3 Blog Posts – the last of which was titled:
This Post follows on two others – the first of which is here – and the second here, about Tin Can – and it’s Promise/Potential versus what’s more likely Probable.

Small businesses, such as SWI – which had between 15 and 25 employees back in the 1980s and 1990s – cannot afford to provide everyone with the performance-based Training that they ideally needed. So – begin with the Ends in mind. The Performance Competence. So we created the Performance Tests – with the help of our internal Master Performers (Cindy was our #1 go-to Production Support person on the Home Team – versus the consultants on the Traveling Team). They – our internal Master Performers helped create these Performance Tests, maintain them/continuously improve them – and administrate them – with their “new-to-the job or task” peers. # # #