This past Wednesday I interviewed Jim Hill, PhD, founder of OPS – Organizational Performance Systems for the second time for my HPT Video Series. We had done the first video way back in 2008. 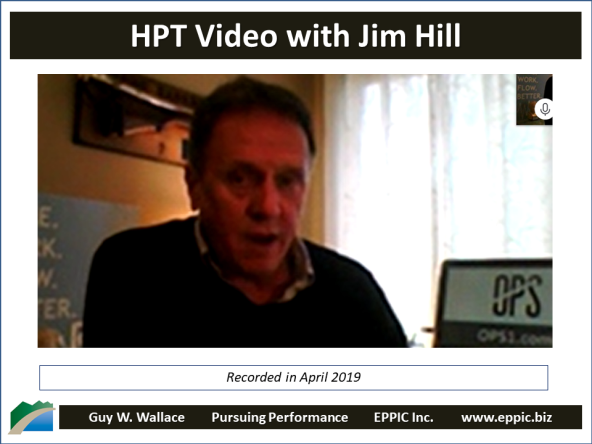 This one was done via Skype – and our connection wasn’t the greatest image-wise or audio-wise. But the conversation was GREAT!

Jim and I go way back into the mid 1990s at NSPI/ISPI. In 1999-2000 we served together on the ISPI Board of Directors when Dale Brethower was President and in 2000-2001 when John Swinney was President.

Jim is the founder and CEO of Organizational Performance Systems.

Previously, Jim was a Marine Corps officer and an executive with Sun Microsystems. He is a past president of the International Society for Performance Improvement (ISPI).

He holds degrees from The Ohio State University, Webster University, and Averett College, and he received his doctorate in human and organizational performance from the University of Southern California.

His book, Giving Away Power, was published in 2013.

He is the 2016 recipient of ISPI’s Distinguished Service Award.

The full set of videos are on YouTube and the index to them all and links to YouTube may be found  – here. There are now over 80 videos in my collection.

HPT – Human Performance Technology – is the application of science – the “technology” part – for Performance Improvement. As the late Don Tosti noted, “All performance is a human endeavor.”

HPT Practitioners operate at all of these levels, as this Video Series clearly demonstrates.

Although ISPI – the International Society for Performance Improvement is the home of many HPT Practitioners – the concepts, models, methods, tools and techniques are not limited to any one professional affinity group or professional label.