My Degree Is In: Radio-TV-Film

I had secured my job 5 months earlier after the 3 managers I worked for during my 2.5 years in Lawrence had told the HR VP that he needed to hire me – when at a Management Conference they had heard that HQ was going to switch from 35mm slides with audio tracks to video. VHS and not Beta.

And that every store in the system (was it 183 or 283 – I cannot recall) would be getting VHS Players – that wouldn’t Record – to minimize the incidence of Shrinkage from theft.

So I made the long drive to Saginaw 2 days after finishing summer school at Kansas – thus completing the requirements for the degree that I had been handed a diploma for back when the Spring Semester had ended and I walked with the other graduates down the hill to the stadium.

That’s me 2nd from the left, on the set.

At Wickes I worked alongside two people from Blue Cross Blue Shield of Michigan in Detroit – who had worked alongside Geary Rummler’s brother Rick in a Training capacity. One was our manager and the other my peer – who was also one of my early mentors in the biz of performance-based Training, especially in Analysis of the Performance Requirements.

In our small department of 10, was Geary Rummler’s brother-in-law, who ran the media side of our operation – and he was going to oversee the switch from 35mm slides to video. He turned down hiring me – and hired John instead – but as the HR VP told me they were going to find a place for me somewhere in HR as I had the background (video) they wanted. But he really wanted me in Training – a department he himself had run before being elevated to owning all of HR.

So I made 3 round trips, flying from Lawrence to Kansas City Missouri to Detroit to Saginaw, in the Spring of 1979 to meet first that brother-in-law, then second the Department Manager, and then third to meet my new Manager of Training Development. She hired me as I would be the only one of the 3 of us with any field experience.

I had won several Sales Contests in my 2.5 years in the field, even as a part-timer competing against the 4 full-time Inside Salespeople and 3 other part-timers.

And I had experience with the old training courses.

Video in Training – Back in the Day

And then I attended/participated in the pre-production meetings with the Video people, the video shoot, and the post-production where we fixed everything in the editing suite – as the joke went.

Did I mention that there was no defined process for any of that? So you can imagine how that went. It went poorly … and I did not like it at all.

Me, the guy who back in Lawrence didn’t like hearing customers complain almost every stinkin’ day – it seemed – about our inconsistent policy and pricing regarding our “deliveries right to your door” – and who then went/stormed back into the admin office, grabbed the phone book, turned to the page with a local map, zeroxed that map, found something circular to trace with, made concentric circle on that map with pricing on the side, posted it visibly on a post on the corner of the sales area with all of our pricing manuals, special order binders and sales and return forms (in triplicate) … and then found the Store Manager out in the yard, and yelled at him that I had, “fixed the god damn problem!”

I had learned such approaches back in the USN (1972-1975), but always including a “sir” before and after swearing like a sailor. 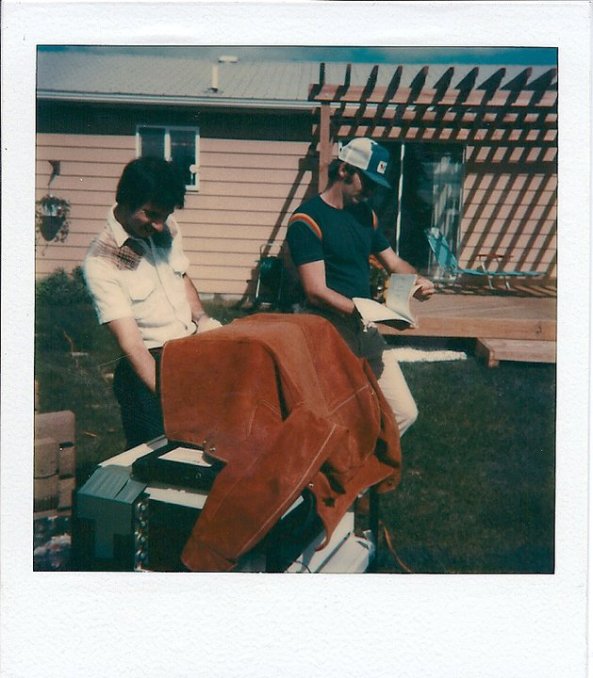 Steve and John on the set.

He went to the sales area, looked at what I had done, and said, “about time,” and wheeled off to address some other management concern.

Then the manager of video took a leave of absence and I was temporarily assigned to the video department where John, Steve and I were to share leadership. Which was a stupid idea. Stupid stupid stupid.

So I soon talked with my 2 peers about each of us taking turns being the assigned Project Leader for each project dropped in our laps, who would have control of all decisions. Soon we would discuss projects, deferring all decisions to the “Oh Great Project Leader” – and peace ensued.

But we still had no process … and I couldn’t stand it.

So I created one, with a set of procedures, instructions and a folder system for all of us to use, to be kept on each of our desks for quick reference given our assignments to help the “Oh Great Leader” achieve success.

My former mates back in Training Development did the Leaders Guide and handouts –  suitable for Xeroxing back in the admin offices – that would be used in the system-wide mandatory 1-hour Saturday Morning Staff Meetings, where Store Managers and their Assistant Managers needed something to do.

John on the camera.

Our one budgeted professional talent – One Take Tom – on camera.

So Video Based Training was my jam. So to speak. Until I got to Motorola 18 months later.

Until I forced myself to watch 40 hours worth of video of Ollie White – THE GURU of MPR (Material Requirements Planning) – in order to give my clients my reaction to their intended use of those videos to “train” everyone in the “Materials” world at Motorola in MRP by way of these videos.

NOT A GOOD IDEA.

But they, the Manufacturing Operations Managers (MOMs), rejected my counsel. Despite my swearing at them (or was it at the set of BORING tapes?).

Guy back in Saginaw at his Home Office – with a Miller.

Video worked for us at Wickes. 15 minutes, plus the Exercises, and the Knowledge Tests (MC), and the Coaching Tips for the managers to use before and after observing the target audience do their thing.

And as I had predicted, Salespeople found the videos useful for Customer Ed.

We soon heard plenty of stories of managers finding customers in the break room watching the videos, especially the Installation Tips and Tricks – allowing the salesperson to “not have to cover that from memory” – and managers who contacted us to see if that was okay to do.

I had made the case/prediction that that was exactly what was going to happen.

So my pitch about making sure that part 3 (do you remember what part 3 was about?) didn’t do anything that might be construed as  Hard Selling of those ancillary materials and tools.

We nudged the salesperson and the customer…

We often used the phrase, “Please don’t forget to ask your customer about the nails and hammers before they get home only to discover that they didn’t have everything they needed” – or whatever materials and tools might be needed in installation by the DIY-er – the Do-It-Yourself handyman or handywoman.

“No one would be happy about that.”

Today Video is all of the rage again. We’ve all got these portable TVs in our pockets and purses and briefcases and backpacks. The smartphone and tablets are ubiquitous.

Performance Support that used to be Job Aids, and Guidance before that. Right?

Tell me about the Performance Context(s) AND the Learning Context(s).

And the Tasks to be performed, the Outputs to be Produced and the Stakeholder Requirements for both.

And the Enabling Knowledge/Skills required to Perform Competently.

And the prior knowledge and skills of the Target Audience(s).

Know your audience – and what they need to be able TO DO. Not just KNOW.

Video: Prof. Richard E. Mayer – On the role and design of video for learning