Rock Stars are made by their customers, the buying public, and not just other Rock ‘n Rollers. And a real Rock Star, to me, is someone known outside of their own profession, outside their own field, outside their own marketplace, and are much more than just a Musician’s Musician, so to speak.

The Beatles were and the Rolling Stones are known outside the world of Rock and Roll musicians, and even beyond their own marketplace to the world at large.

They were/are Rock Stars, so to speak.

But which L&D Practitioners are known outside the world of L&D? Who are renown within the world of their marketplace and buying customers? And to the world at large?

And what would it take for the rest of the world, or minimally, their marketplace of customers and prospects, to know of them? And to respect them for what they have done and can do?

Impact so large that their reputations will from then on proceed them. IMO.

Impact that transcends the project, the client, the enterprise, the industry and out to the greater marketplace, and possibly to the world at large.

There are none from L&D today that I think have reached that status.

I used to think that the late Geary A. Rummler back in the 1990s was nearing such a plateau. And that was because his Intellectual Property was purchased by Motorola when they created Six Sigma. Motorola merged Geary’s Process Orientation with the World of Total Quality Management’s concept, models, methods, tools and techniques.

When GE, a client of Geary’s at the time Motorola came out publicly with Six Sigma, picked up on it and promoted it, Six Sigma got famous outside of the worlds of TQM and Performance Improvement. But his fame, his renown, never went beyond his marketplace.

L&D, and before that T&D, has had our own Musicians Musicians. In 1979 when I entered the field there was Rummler, Gilbert, Mager, Harless, Thiagi, Stolovitch, Bloom, Kirkpatrick, and many others. And there have been many who have achieved that status since. Musicians’ Musicians.

So while the world of L&D has its equivalent of Musician’s Musicians, and their fans within the profession, which almost all professions do, we do not have anyone that I see that is also renown to its greater marketplace, let alone the world at large.

So What Killed Any of Our Budding L&D Rock Stars?

Lack of Impact so large that its story transcends the profession to our greater marketplace of customers. and even beyond that. 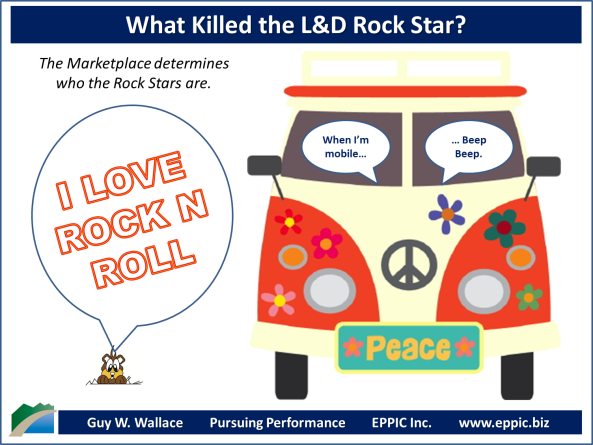 A Word on Creators

Not all who create what later becomes famous, become famous themselves, or are even given their due. Even in Rock and Roll.

Rolling Stone Magazine wrote: The guitar-playing, gospel-singing sensation paved the way for Elvis, and influenced everyone from Miranda Lambert to Bob Dylan.

She was the first great recording star of gospel music and among the first gospel musicians to appeal to rhythm-and-blues and rock-and-roll audiences, later being referred to as “the original soul sister” and “the Godmother of rock and roll”. She influenced early rock-and-roll musicians, including Little Richard, Johnny Cash, Carl Perkins, Chuck Berry, Elvis Presley and Jerry Lee Lewis.

Tharpe was a pioneer in her guitar technique; she was among the first popular recording artists to use heavy distortion on her electric guitar, presaging the rise of electric blues. Her guitar playing technique had a profound influence on the development of British blues in the 1960s; in particular a European tour with Muddy Waters in 1964 with a stop in Manchester on 7 May is cited by prominent British guitarists such as Eric Clapton, Jeff Beck, and Keith Richards.