It’s their resource – if you will.

The issue is that we don’t react accordingly – and may want to put them through the ringer, I mean, our Intake and Development Processes.

I’ve written about this before – here. 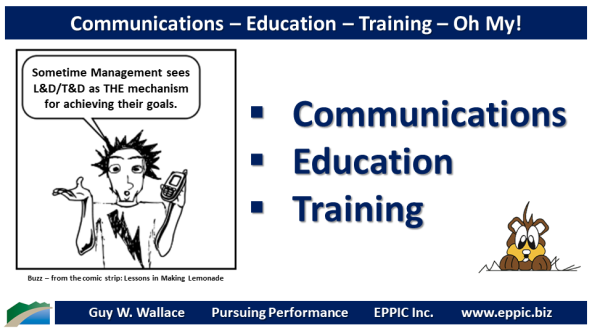 Useful especially when several Target Audiences require different levels of “Terminal Understanding/Ability” … to DO THEIR JOBS. 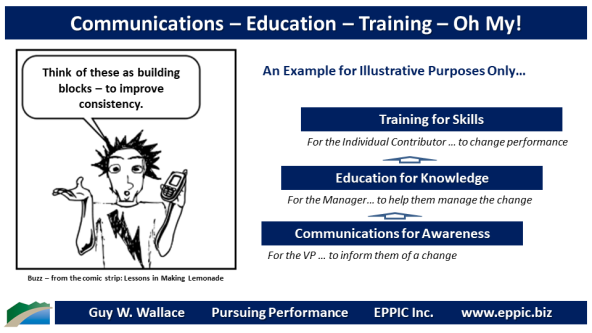 One time – in 1986 – my Analysis Team didn’t want to tag an Enabling K/S Item as requiring either a K or an S “depth of coverage” … should there be a gap in existing Instructional Content and management decided to prioritize that gap for resourcing to make it available.

But they balked … and didn’t want to label an Item with either. And they were the ones who had given that item as an Enabling Knowledge/Skill – systematically derived from the Performance Model charts defining the Job’s Performance Competence requirements! 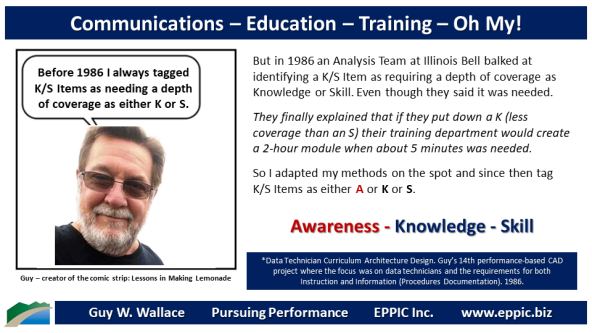 I laughed out loud.

That comment/worry rang true for me.

Another case of Instructional “Overkill-in-the-Extreme”.

I had seen by 1986 tons of Instructional Content going to unnecessary depths of coverage on such low hanging stuff … that you began to understand why, perhaps, none of the tricky, complex and critical skills were being addressed beyond Knowledge levels – going those last miles to Application Skills required back-on-the-job.

Too many resourced were targeting the wrong things. Low Hanging Fruit – is a common term for such items.

So in that Analysis Team Meeting – I created a new “level of depth of coverage required” – for every K/S – Knowledge/Skill Item.

“A” for Awareness – which was a signal to all concerned that THIS ITEM needed very little depth of coverage in any Information or Instruction – if management via the Project Steering Team decided to move that beyond Un-Structured OJT – which is what I’ve been calling – what later became known as Informal Learning – since 1982.

That worked for them … and we continued marking up the flip chart pages with a A or a K or an S – in that particular column.

Sometimes an A is needed  – and sometimes a ZERO is needed – such as when a K/S didn’t need to be addressed at all. Such as the use of the Phone System, or changing the toner in the copy machine.

Those were classics examples of topics/tasks/etc. that were candidates for the Un-Structured OJT treatment – meaning: nothing at all – back in the day.

A Seductive Detail Aside

Although I was shocked a year or so later when changing the toner got an S in one Analysis Team Meeting.

The sales target audience – represented by a group of Master Performers – all well knew the story – a legend as it were – of the $5MM sale opportunity that was missed when the Proposal Writing Team couldn’t make the 3 copies of the typed Proposal response the RFP required in time to make it out to the Federal Express box – right outside their office – by the 5 o’clock pick up time – because the toner ran dry and they couldn’t figure out how to change it.

And one of that team watched helplessly through the window as the FedEx pick-up happened floors below them – while much cursing and banging was going on in the next room.

When the Project Steering Team saw that Copy Machine item in the K/S Matrices – and the ratings it got – and I went to explain that to them – I was interrupted by one of the executives who related that story directly to my client – the Training Director – before he could wonder out loud why the heck THAT got an S – and a Critical Rating in the other columns – because … come on now. Everyone else on the PST nodded their heads in agreement. They weren’t going to let THAT happen again.

Better safe than sorry, I guess. 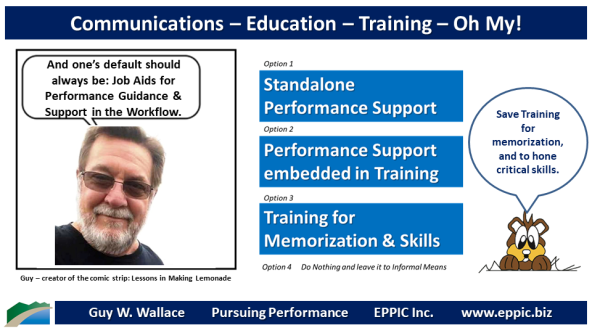 What that Sales Target Audience really needed of course, was a Job Aid.

Which nowadays one can find inside the copy machine after opening the door.

But back in the late 1980s it simply was not easy to deploy and maintain Job Aids.

The technology at the time merely let us laminate them. And many times that was after getting them down to a “wallet-size” – and so that’s what we did if the Job Aid couldn’t be affixed to some machine or office wall.

Nowadays there is no excuse to not have Electronic Job Aids for Performance Guidance & Support in the Workflow.