It First Happened For Me at Wickes Lumber

The Peter Principle – by Laurence J. Peter. It was the first book out of college that I was given to read – because all of the executive team at Wickes Lumber, in Saginaw Michigan (now defunct) was reading it in 1979. I was a lowly Course Developer in the Training Services Department and my boss and boss’ boss and most of the rest of the staff were reading it at the time.

I had just finished college while working part-time at Wickes Lumber in Lawrence Kansas and was immediately give a few books to read about my new “profession” including Mager & Pipe’s “Analyzing Performance Problems” and Gilbert’s “Human Competence” – but The Peter Principle was not about what my new job was about – and I was reading it because everybody else was (in the upper echelon) and I needed to know the language that that book was introducing into the corporation.

The book was already 10 years old at this time, but it was making the rounds at Wickes and I would see copies of it on the desks of my clients/contacts. I’m now guessing that something had happened to cause everyone to rediscover this book – but I know not what that could have been. But it might have been people thinking that the wrong person got promoted. Hmm. 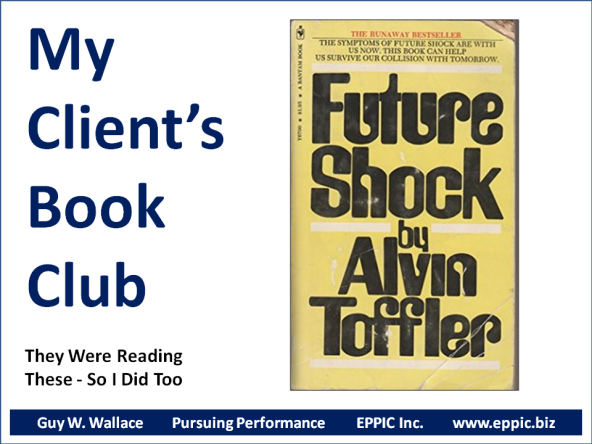 We also all started reading Future Shock by Alvin Toffler (1970) – trying to catch up to the ever changing world now in high gear, it seemed.

After 18 months in Saginaw I moved back to Chicagoland and joined Motorola’s new MTEC – Motorola Training and Education Center – where I was reading more training books and non-training books and articles related to my corporate focus of manufacturing, materials and purchasing. Books like Donald Dewar’s “Quality Circles” and articles overviewing the NBC 1980 documentary: “If Japan Can … Then Why Can’t We?” That video making the rounds was a WAKE UP CALL!!! And it introduced American business to the thinking of an old guy … W. Edwards Deming.

And other videos – the new medium that was again going to change everything in Training! – as some may recall … how could I ever forget sloughing through Ollie White’s 40 hour series on MRP – all 40 hours of talking head video. Yawn and triple yawn. Great topic but lousy presentation.

Then in 1981 I went out and bought the new book that everyone (it seemed) at Motorola was reading and lauding: The Soul of the New Machine – by Tracy Kidder. 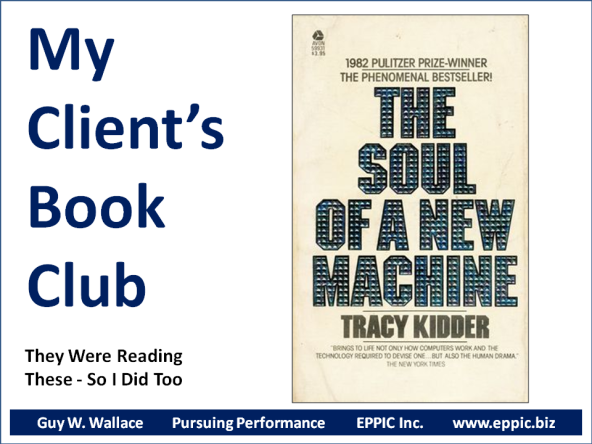 This brought to my attention the nature of engineering teams at play in the development of this new thing called a computer. Yes, we had some on the desks of the admin assistants at Motorola (the former secretaries) – but we Training Supervisors did not. And of course, Motorola was an engineering company and was moving through many changes, including a move to a Participative Management approach (a Systems 4 organization in the terms of Rensis Likert).

Then At R. A. Svenson & Associates/ Svenson & Wallace Inc.

I became an external consultant in 1982, serving mostly F500 firms. My specialty was performance-based Curriculum Architecture Design – creating visible paths through a sub-set of my client’s set of curricula and specifying the gaps for management’s consideration and funding.

My client at AT&T Network System was the guy who purchased the latest books getting management’s attention – ensuring that all were singing off the same song sheet – if you will – and he would give me those books to keep me up to speed with the new language being introduced.

The Age of Unreason – Charles Handy – was published in 1980 but was making the rounds at Network Systems in 1987. Network Systems was the old Western Electric – the manufacturing arm of Ma Bell, as it was known before the monopoly ended in 1984.

Next they gave me a copy of the 1990s classic: The Fifth Discipline: The Art and Practice of the Learning Organization by Peter Senge. 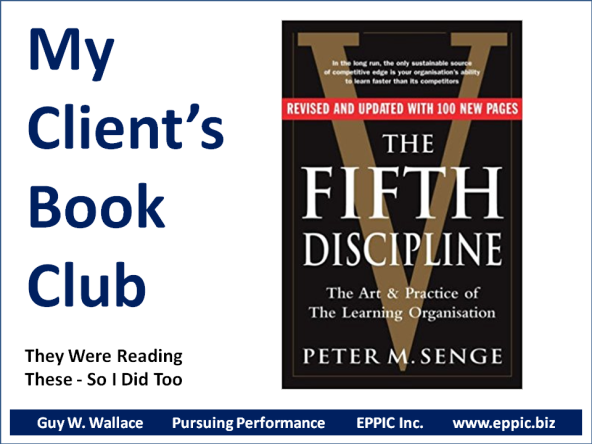 Then in 1991 that same client shared with me The Machine That Changed the World – Womack, Jones and Roos. 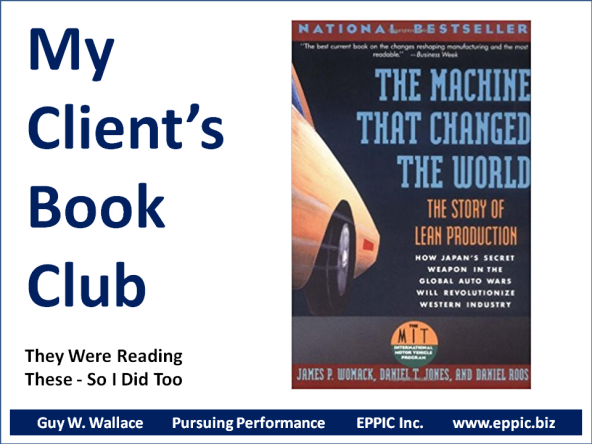 That introduced me to Lean. And that changed my thoughts about ISD – Instructional Systems Design – and even changed the name of my book on ISD that I’d been working on since 1983.

My reading slowed down after this point – in the mid-1990s – and I quit reading and just relaxed on the airplanes with my Sony Walkman – until I discovered that I needed glasses.

Then my reading picked back up again. And I switched to instrumental jazz and new age and rock and classical music on the Walkman – so as to not overload me cognitively – as I read for comprehension.

In 1997 I started CADDI – the Curriculum Architecture Design & Development Institute. And clients continued to influence my airplane reading focus – as that’s when I seemed to have the time for non-project reading. Otherwise I was trying to write my 2nd book – a solo effort – lean-ISD (1999) – the one that I had started in 1983 and was determined to get done before the current century turned a page.

Most memorable was The Knowing-Doing Gap – by Jeffrey Pfeffer and Robert Sutton (1999). I forget exactly which client introduced me to this – but I recall seeing on someone’s desk and making a note and later searching my local bookstore for a copy.

In 2002 I began EPPIC Inc. as a solo endeavor. Good to Great – by Jim Collins (2001) was being read at several of my clients’ organizations, so I picked up a copy at the airport (of course) for more flight-time reading.

In the 2007 time frame – I reinvigorate my Blog – which I had begun in 2004 – and my reading habits switched from reading paper books to reading screens.

And more recently I find that most of my reading is of articles and less of books nowadays – with a couple of exceptions. And I am still cranking out the blog posts in my semi-retirement.

I was asked to read and review 3 books in the last few years – and all of them were GREAT thankfully – so the reviews weren’t chores – but were labors of love, so to speak: 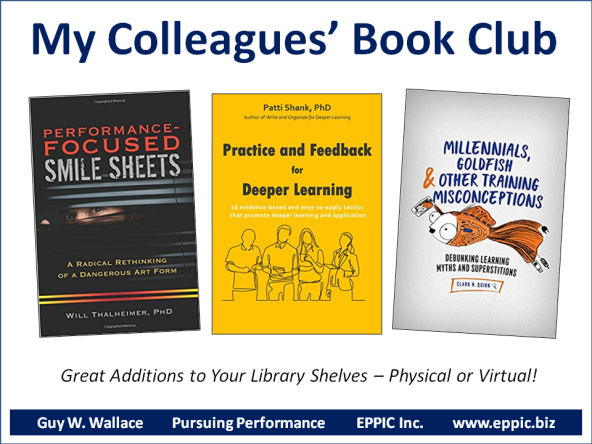 And I’ve written 14 books myself. So reading and writing and arithmetic have kept me busy – Book-wise and now Blog-wise. I see that I’ve now published just over 2800 Blog Posts since redoing the Blog in 2007. Whew.

What Books Have You Read Because Your Clients Were Reading Them?

Have you read to keep up with your clients?

Please share those books and authors in the comments section.

One comment on “L&D: Join Your Client’s Book Club”